Gravenmoer lace consists of geometrical patterns, have the square and rectangular shapes and are often surrounded by a contour thread. A report consists mostly of two motives, with each motif of two mirrored parts is built. Just a few tips have a motif per report. On the right hand side of the bobbin letter specifies the beginning and end of the subject with small strokes. The number of pins between these two lines specifies the size of the two motifs. The greatest rapport has 73 pins and the smallest 12. The motifs are geklöppelt in the lines or in sloping half blow. Also rose base and various cross stroke variations occur. The tips have, apart from a few exceptions, a straight outer edge. Along the outer edge, most of the time the "perkinneke" or the small head is geklöppelt, or a double or triple series of small blocks with a contour thread forming a zigzag line, therefore around. The reason consists of closed hole punch, called honeycomb reason. 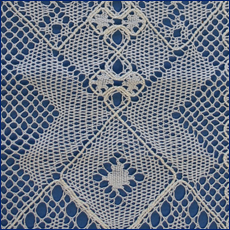 Where instead of horizontal, vertical lines. 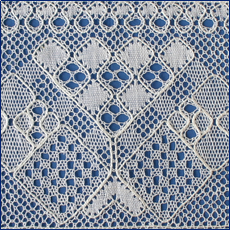 Widely used pattern by lacemakers from a family of fruittelersom. 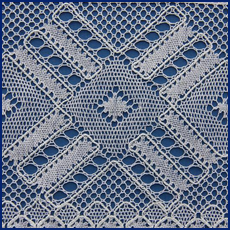 This pattern used lacemakers from a family of Millers. 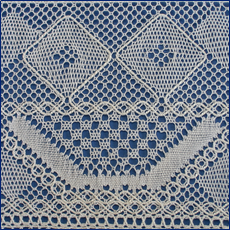 Widely used pattern by lacemakers from a SA family. 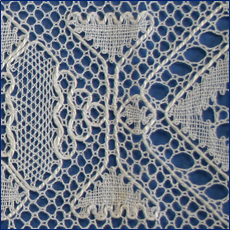 A "knipschaar" is a motif in diagonal half stitch which is separated in two with a row of closed pin stitches placing the gimp above and under. 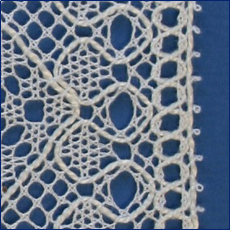 The "perkinneke" or ladder is an opening along the outer edge.